Living and working in Germany can be difficult and disorientating: different values, diverse backgrounds and a culture that is not always easy to handle. The reason is that the Germans are different – like everybody. Particularly business communication often requires us to deal with typical German behaviour – both in business and privately.

Dr. Gutjahr, as a trainer and mediator you coach both Germans who go abroad as well as people from other cultures coming to live here in Germany, right?

Well, sorry for that rather short answer, it was in fact quite deliberate. What some non-Germans often find irritating is the curtness of reply in this country. Germans often have no problem with mono-syllable responses. They come to the point quicker than people from many other cultures.

Who would be irritated by that the most?

That would be for instance Anglo-Saxons and people from Asia: China, India, Japan, Korea, and Thailand…

So you think the Germans live up to their reputation of being rude?

Not at all. Germans are not ruder than others. They value precision, clarity and facts very highly. That is also liked in many parts of the world: ”Made in Germany” still means exactness and quality. That does not just apply to cars and machines manufactured in Germany but also to the culture. Being short and to the point, presenting facts and figures rather than providing ”infotainment” and disagreeing openly is seen as good behaviour. Beating about the bush or not stating your own opinion is seen as too much fluff – too little substance. 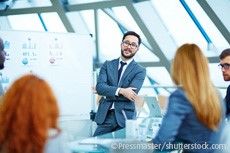 Effective Meetings and Negotiations in English

The internationalisation of business requires us to conduct more and more meetings and negotiations in the English language. Effective communication and negotiation skills have become vital factors in achieving success in our professional lives. With thorough preparation and convincing arguments, well presented to your audience, you can achieve your goals with greater ease. Through our seminar you will be able to increase confidence when using English with clients, colleagues and suppliers in meetings and negotiations.

So what are your two top recommendations when presenting in Germany?

Firstly, people should provide a lot of detail. Germans need to get the impression that the speaker is an expert on what s/he is talking about. So you should provide details which in your own culture would be too much or not necessary. Secondly, be ready to answer detailed questions – maybe asked in a form you would consider overly critical. If I may add a third point: Do not start an important presentation – for example to top management – with a joke. Otherwise you might be regarded as insincere…

In a business environment Germans want to be ”seriös”. The translation could be ”serious”. But that would miss the point. Germans like jokes. If you work in a German office there will be jokes told or even practical jokes played – maybe even on you. So ‚seriös” is something else: it might be better translated as ”trustworthy”. All business depends on trusting your partner. So how can you build trust? In Germany that is done by providing substance, being reliable, being the expert. ”Solide” is another important word in the German business environment. It means solid, i.e. reliable as a rock and also well done, with quality. I think those two words sum up the German business approach quite well.

What about leisure time – often Germans are described as stand-offish, distant and cold

In my experience, I would say there are those people almost everywhere. What foreigners often misjudge as coldness is a rather strict separation that Germans usually make between private life and business life. Do German colleagues go to a pub together after work three, four, five times a week, like in London? Not really very common at all. ”Dienst is Dienst und Schnaps ist Schnaps” they might say. It translates loosely as work (Dienst = service, duty, work) is one thing; after work is something entirely different.

So what should expats from other countries expect living in Germany?

A) Be prepared to receive and deal with rather direct criticism. Being critical means the Germans take you seriously. So that is a good sign. B) Don’t expect them to provide a lot of positive feedback (”Lob”). Often the idea is: no feedback is good feedback. And C), it takes time to make friends with Germans – but once you have made friends they are likely to be friends for life. Someone once compared the German way of doing things with a coconut: it is really hard to get in, but once you are in, it is definitely worth it!

Effective Meetings and Negotiations in English

The internationalisation of business requires us to conduct more and more meetings and negotiations in the English language. Effective communication and negotiation skills have become vital factors in achieving success in our professional lives. With thorough preparation and convincing arguments, well presented to your audience, you can achieve your goals with greater ease. Through our seminar you will be able to increase confidence when using English with clients, colleagues and suppliers in meetings and negotiations.